The Charles Ringling Estate is a one acre site located several blocks from the business district of Baraboo, Wisconsin. The parcel contains four wood frame buildings: the Charles Ringling House, a carriage house, the Conway Cottage, and a small barn. The lot is planted with mature oaks and maples, mainly on the east and north side, and newer trees, replacing the original elms, on the street aspects.

The property is bounded by Eighth, Ninth and Ash streets with an alley passing behind the house in an east-west direction. The house stands by itself on the southern half of the property, all other buildings are contained on the northern half. The Carriage House is situated behind the main house, the little barn on the north-east side of the alley, and the Cottage north of the barn, facing Ninth Street on the north-east corner of the lot.

The Charles Ringling House is a large, wood frame, Georgian Revival residence built by the Isenberg Brothers of Baraboo in 1900. The house is two stories high with a full attic located under its hipped roof. Gables emphasize the central bays on the front and side elevations. The house rests on a rusticated granite ashlar foundation which rises in even courses to approximately three feet above ground level. The house is canary yellow with white detailing.

The principal facade of the house faces onto Eighth Street and is approached by a sidewalk. From here, wide steps lead up to a large landing floored in red tile and with rusticated granite surrounds. From the terrace four more steps lead to the one story front porch. Fluted, wood Ionic columns support an entablature with dentils and the porch’s flat roof. A turned wood balustrade runs between the columns, and is repeated on the roof of the porch. The porch extends across three bays of the ground floor facade, and defines the main block of the house.

The ground floor facade, lying some nine feet behind the columns, divided into bays by applied Ionic pilasters. The two outer pilasters terminate the porch. The two central pilasters rise behind the porch to the full two stories of the house. Together with pilaster corner boards, the tall pilasters provide visual support for a second dentilled entablature capped by a heavily molded cornice. The two tall pilasters also provide the base for a central pediment. In its center is a lunette framed with heavy molding. At the center of the porch is a double front door of oak with an egg and dart molding surrounding single, glazed panels. The door is flanked by 10 light side panels. The flanking bays each contain a large single sash window with an overhead fixed, two light panel. The second story fenestration is of double hung windows, in the center of each of the flanking bays, and paired windows in the central bay.

On the east side, the central bay, marked off by plain strips, is capped by a gable with a large double window surmounted by a lunette similar to that of the center front. In the left hand bay, a broad, high set tripartite leaded glass window is centrally placed under the flat roof of the second story porch. The west leg contains three square, leaded windows set below a shallow cornice molding.

The second story contains a single double hung sash window. The far left bay of the east leg is lit by two sash windows below and a single window above. The rear bay contains a large, Palladian motif window, framed in heavy molding. The roof line is also irregular; a large double dormer breaks the roof line at the rear bay. The elevator tower rises above the service bay and, although it was added later, the tower maintains the same materials, cornice molding, and corner pilaster strips found elsewhere on the exterior.

However, in contrast to the predominantly rectilinear windows elsewhere, those of the tower have arched tops giving the structure the impression of the belvederes of the Italian Villa style. Located within the U is a large porte cochere. A balustraded flat deck is supported by paired Ionic columns standing on a low granite wall. The columns are round and fluted, except at the corners where they become square piers with Ionic capitals.

The porch portion of the porte cochere provides two means of access. From the drive there is a high step to disembark from a carriage. Pedestrian access is provided at the side by a short flight of stairs. The door from the porch leads to the back hall. This door is glazed, set in paneled oak. A second, service door is located at ground level at the base of the service bay. On the west side of the house we return to a more regular plan.

As on the east side, there is a slightly protruding central bay with a gable lit by a double window surmounted by a lunette. The ground floor windows are large, corresponding to the entertainment functions of this side of the house. On the left is a bay window. At the center is a set of three windows and to the right single windows flank a central chimney. 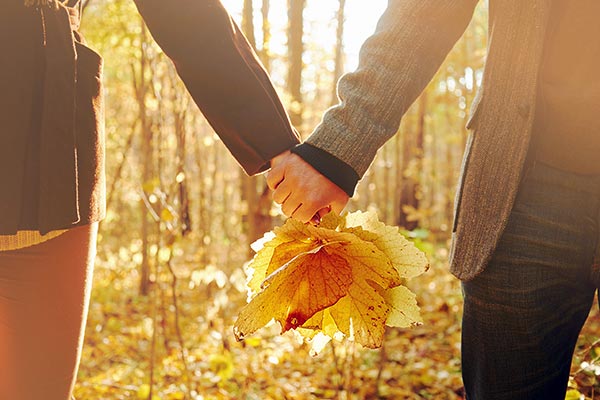 FALL IS THE BEST TIME TO GETAWAY!

Now is a great time to visit us.  The weather is crisp and mild, the crowds of tourists are gone, so now you can relax.